I Am Not Writing a Book of Poems in Hawaii 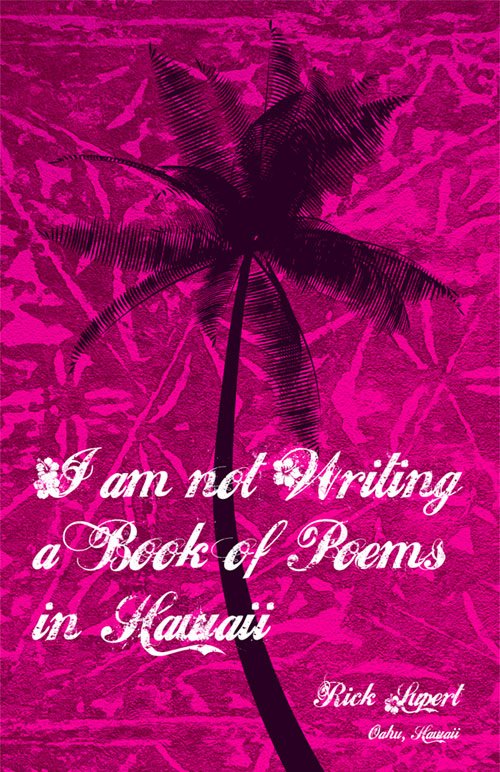 Rick Lupert heads to the ho-lei land in his 26th collection of poetry written (despite the title telling you otherwise) in, and on the way to and from, Oahu Hawaii. With his characteristic wit and occasional bits of wisdom, Lupert’s third eye takes us all over Hawaii’s capital Island experiencing magical fruits, sea turtles, Lost filming locations, at least two luaus, wild-roaming chickens and the sweetest family spirit you can imagine. In Hawaii, as soon as you show up, they declare you are ohana – family. Let these humorous and accessible poems bring you into the family as you contemplate your own visit to paradise.

…If you’re looking for a hilarious, moment-to-moment poetry low-down on the daily doings of a smart, surly teen, his wise and multi-talented mother, and his hapless dad (who happens to be Rick Lupert, our intrepid poet reporter) as they negotiate the touristic foibles of Hawaii, this is the ONLY BOOK FOR YOU. Everything is a poem. Then there is Nothing ever happens unless the poet is there to write it down. And do not forget that Writing while simultaneously swimming, riding in a bumpy Prius on the way to a pineapple farm and ordering a blue mai-tai is a prerequisite for being a poet. Honestly, I don’t know how he does it. But I’m grateful – and joyful! — that he does.

Like his book on his trip to Japan, Lupert’s works here read like a travelog written during a 7-day trip to Hawaii with his wife and son. His dry wit, ironies, and unexpectedly insightful endings are laughable but often stun–all delivered with almost childlike simplicity. His personally felt and rendered details expose the contradictions observed by a soul passing through a strange, non-paradisiacal, unpromised land in this day and time generally–in this book, particularly in Hawaii. Keen, entertaining, humorous, and enjoyable.

Read the poem “Parenting Lessons from the Holy One” at JewishPoetry.net.

where I have now revealed I’m going
to Hawaii, to write a book on this trip.

so I’m trying to write most of it the night before we leave.
I still don’t have great confidence that

I’m going to be able to pull this off.
In fact, the next poem I write will be called

Sorry, Folks, I’m not Writing a Book of Poems
in Hawaii.

A Person Must Eat

My double jointed twelve year old
holds out his oddly shaped elbow
and says daddy look I broke my arm
hovering over a taro-based veggie burger
and a fruit plate with mediocre fruit
but with a pineapple cream dipping sauce
that is to die for. Wait, what was I talking about?

It is colder than I imagine summer in Hawaii should be
on this balcony, or as my roommate Tony used to call them, lanai.

A lanai is an indoor/outdoor roofed architectural feature
that has one “wall” open to the elements. So why not!

Waikiki beach is below and empty….the fires have gone out
around the luau poles at the adjacent property.

It is hours later in my body than it is in my location.
We’ve already negotiated breakfast though I was

The only belt for miles is an expensive one and
it doesn’t seem worth it.

Two summers ago we were in Japan and now
we’ve barely traveled half that distance.

Though they were here once too.
We’re about to find out all about it.

You Had One Job

There’s a crisis of faith happening
in our hotel room when we realize
the towel hooks in the bathroom
aren’t sufficiently designed to
actually hold the towels.

on the harbor floor, the final resting place
for over a thousand men.

This is not an attraction
the park ranger tells us.

turned off the pipeline to Japan.
This sleeping giant awoke that day

and the price that was paid –
incalculable.