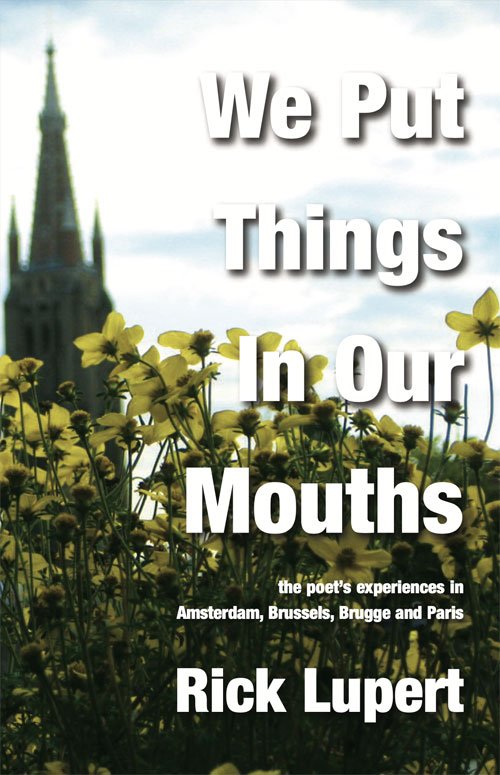 A new collection of humorous European poetry from poetic observationalist Rick Lupert, master of the poetic travelogue. Join Rick as he travels through Amsterdam with Rembrandt and Van Gough and discovers his hesitance with the city’s slogan “I Am Amsterdam.” Taste Belgium’s chocolate and beer in the cities of Brussels and Brugge (that’s how THEY spell it.) Stop in to Magritte’s house. Re-visit Paris, its cheese. its Monet, its wild eyed man with a giant toothbrush in Montmartre. Travel through Europe with Rick Lupert as his wife earnestly tries to get the pen away from him. Rediscover your poetic sense of humor…put these poems in your mouth.

“[Lupert] writes to us as if we were together, in a library say, a room where speech is forbidden. His poems are passed to us with a nod, a smile librarians can’t see.”

Poetry from We Put Things In Our Mouths

In the Van Gough Museum

I want to take a photograph
of the woman who keeps saying
“no photography” and then I want to ask
her “oh yeah, what if I have
a photographic memory?”

City of tolerance and soup
canals and pancakes
Your trams in their grooves
your red lights, your whores,

Oh Amsterdam,
there is a market on your corner
an art in your window
You, who turned in Anne Frank

your homo-monument.
Oh Amsterdam
The beer, the hash, the tulip
the wood shop

Half your people are syrup sweet
the other half mustard annoyed
Oh Amsterdam, I Amsterdam
The other vowels too Amsterdam

We think we like you
your dike, your pea soup
but we’re not sure how you feel
about  us.

Tonight in Brussels
so hungry we have two dinners
at same restaurant.
Confuses waitress who asks
“didn’t you already eat?” we think,
it was French so could have been anything.
Two meals later we
drink Belgian beer next door.
I bump head on giant wheel,
walk away to see family of
pissing statues
and their dog.

French Class Was So Many Years Ago

The Swans are Organizing

At night we see two swans
wading away from the main swan area
towards, perhaps, the North Sea.
They meet up with
two more at a canal intersection
and then two more a little further.
The swans have not organized
like this since the revolution.
Things are afoot.

They have a museum
for almost everything here,
but not ducks.
The ducks probably
wouldn’t stay on the pedestals
which would lead to frustration for everyone.

Remembering these details when looking
at other paintings

Realizing the similarity
between the two pieces and

you rarely look at art and
feeling guilty about that

The weight of that guilt

If this is you
Maybe it is not

Your omelette
a sculpture