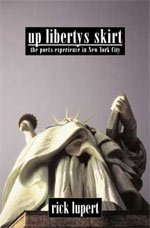 It was time to visit the big city. Sure, the city I live in is bigger; but that’s not important. New York is the BIG CITY…it’s certainly taller than Los Angeles. There’s a lot to be said for compacting everything onto an island. Feel free to say any of those things. I’m not going to say them for you. Opinions are expensive in these parts. Send me a dollar, and I’ll tell you what I think. I like Islands. Brooklyn is not an Island. There is fabulous Mexican food there. The kind of food you wouldn’t find on an island. The kind of food I wouldn’t expect to find east of Arizona. So meet my trip to New York City. Someone once said to me “Oh you with your books about the places you’ve been.” It’s true. New York is a place, and I have been there, and this book is all poems that I wrote there, except for the last two which I wrote in New Jersey, and the first few which I wrote on the way there. But the rest of them in the middle…oh yes, those were written in New York City.

Poetry from Up Liberty’s Skirt

Fight On The Subway

There’s a fight on the Subway
Car in front of mine
Can’t see anything
But the yelling
Which, of course
I can’t see either

The baggage room
with misplaced immigrant possessions
One hundred years, the Wolinsky family
still without their precious forks and spoons