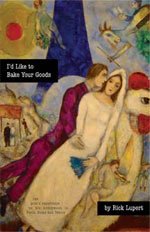 Poems written on the author’s honeymoon in Paris, Rome and Venice
Ain’t Got No Press / January 2006 / Paperback / 100 Pages

100 pages of new poems written in love in some of the most amazing places on earth (Paris, Rome and Venice). A full length collection of travel-poetry from Los Angeles poet Rick Lupert.

The thirtieth of June, two thousand and four
but in French

The Eiffel Tower and the moon
make a nice pair

On French TV, a cereal box with eyes
lives in a pineapple house under the sea

It’s so cute that we have matching suitcases
I wonder if they’re married and that’s where
our smaller luggage came from.

P.S. Our backpack was adopted.

At the Arch of Constantine

I thought of you
while standing under Constantine’s Arch

When they failed, they simply put crosses on top
and called it a day

I stand under your Arch
surrounded by white noise

Some Thoughts On Modes Of Travel
And The Travel Industry While On A
Boat From St. Mark’s Square

When an airline purchases an airplane
from a manufacturer of airplanes
is the plane delivered or is it picked up?
In either case, who pays for the airfare
to either travel to pick up the plane,
or travel back home after delivering it?

I know a man who lived on a boat once
and at a different time was also a gondolier.
Some day, I think he’ll move to space.

Where they go from there,
I do not know

Maybe the ocean
or a place where such things are investigated.

I rinse the blade
The honeymoon is over