Brendan Constantine is My Kind of Town 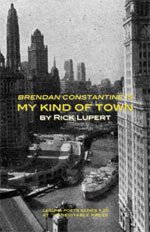 “Rick is a poet with a real genius for the subtle ironic humor of absurd situations. He holds all the wild cards. He even violates the rules of agreement in the next to last line of Freeway of Love – to underline the aesthetic paradox of “relationship” in a universe of radical solpsism. And that is truly surreal. People are travelling everywhere in this book: Chicago, San Francisco, Istanbul. But the best trip of all is the fishing poem: an hallucinatory plunge into the chthonic troustream of the imagination. If you’re already a Rick Lupert fan,you’ve got to have this book: you can’t possibly live without it. If you’re not yet familiar with his work, buy it, read it, and fall in love. You’ll soon find yourself stalking him outside of the Poetry Super Highway studios just to get a fleeting glimpse of his shadow. You’ll send him emails, begging to take care of the cat while he goes on vacation. Etc. This is a classic.”

Poetry from Brendan Constantine is My Kind of Town

She doesn’t
She loves you intensely, too
Knows you are following

I explain my emotional connection with cheese
to a wide eyed man who counters with his allegory
of the fish and chips so good, it killed him.

“What are you going to do now that you’re dead”
I ask the man, and he says nothing, like dead men do.
It’s then that I notice his tie is not merely silk

designed to look like a fish; it’s actually a fish.
Trout, specifically. The kind you might find in a trout stream,
or in your backpack, if you’re the type to carry trout around.

Trout like the one hanging from this man’s neck,
like it had been lynched, like, watch out Halibut,
you’re next. It’s then that I notice the rest of the man’s

about cheese with a trout stream. Imagine my surprise.
I gather myself together, say to the trout “Hello Mister Trout.”
Trout says back to me nothing, like trout do,

then swims away, probably to spawn. It’s then that I notice
before the trout disappears into the trout stream distance,
it seems to be wearing a neck tie in the shape of a dead man.

I check to see
if I am still breathing.
I am not.

Ten men
will write down
everything you say

Which we love
here in Los Angeles
But in Istanbul

while we question him
about Klaus
and the boat.